I was suppose to be meeting Ffion at Llandegla, but after waking up with a sore upper body after going a little too hard in the gym, for some reason I thought I’d go running at Llandegla instead. I don’t get to see/walk Jenson much these days, so I brought him along too. 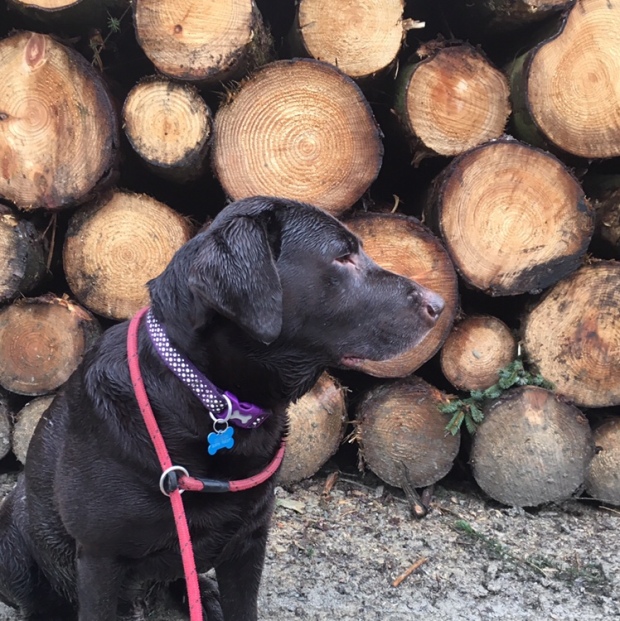 We parked up in Llandegla and went to see where the running trails started. It felt weird seeing the #GirlsAtLlandegla posters up! I can’t wait to see everyone riding the trails!

I eventually found the start of the running trails and could let Jenson off the lead. His tail was up and wagging. He loves it in the forest and I’m pretty sure it’s because of all the muddy puddles.

I’ve not been running for a while and it felt good to do it again really. It’s just simple. Chuck your running trainers in the car (possibly a dog too if there’s one available) and find a forest to go and run around.

I desperately wanted to go and ride my mountain bike, but the downpours forecast on the weather didn’t fill me with confidence.

There’s two 10km running trails at Llandegla, the red or the blue. As much as I’d like to think I could get round the red, the vertical inclines up a boggy bank that the red entailed meant I’d leave it for another day. The blue was enough really. There were plenty of hills for me and Jenson to get up to get my glutes burning…and that they did!

I’m not going to be the ‘hero’ and say I ran all the way round. I had to have a few breaks and I couldn’t not take a few photos right?

When the running trails went away from the mountain bike ones, the forest was so quiet. Seeing all of the mountain bikers ride past with mud splattered faces, part of me did feel a little jealous. But I couldn’t have brought Jenson if I was mountain biking.

On one part where the running trail runs near the start of the long climb on the red MTB trail, I just assumed Jenson had followed a scent into the bushes.

He decided to go and say hello to the mountain bikers…

Thankfully they were happy mountain bikers and didn’t bother too much! Ha!

Only the have a young shredder racing through the car park with his Dad and the BIGGEST grin on his muddy face. You could tell he had love every second of being out on his bike.

Next thing his Dad is saying close to their van…

And they skid round the corner to their van in sync. The young lad must have been about 5 years old. 5 years old and he was skidding in sync with his Dad.

That is what cycling is about…having the BIGGEST grin on your face.

One thought on “Trail Running at Llandegla Forest”