All of the swanky cycling stores seem to be in London. From Rapha to ASSOS, what can a cyclist get up to in London?

When I initially think of London, cycling doesn’t tend to be the first thing that comes to mind. More sky high buildings and jam packed roads. Businessmen in suits getting frustrated with the copious amounts of tourists. The distinct lack of mountains making trails hard to come by. As well as it’s jam packed roads, London doesn’t exactly scream ‘cycling city’.

But if you look a little deeper, the cycling scene in London is stronger than ever. Chain-gangs circling the many parks. Bike shops hidden away in amongst the hustle and bustle of the capital of Great Britain.

So what’s spouted from this great cycling scene?

First off is the cycling store that is Rapha. Started in 2004, Rapha has become one of the most well-known brands in London as well as being known worldwide. Previously the kit sponsor for Team Sky, Rapha portrays quality in the products they sell. In amongst the shops of Brewer Street, the half bike/half coffee shop is any roadie’s dream and a must if visiting London.

With kit varying from socks to full Lycra sets, as well as being full of cycling memorabilia, Rapha is a definite past-time for any roadie visiting the big city.

More new to the scene is the London shop for Swiss cycling brand, ASSOS. Walking into the white-washed wall shop you’re surrounded by cycling kits for every climate. From cold winter months to sweltering Alpine summer rides, there’s kit for just about any conditions. 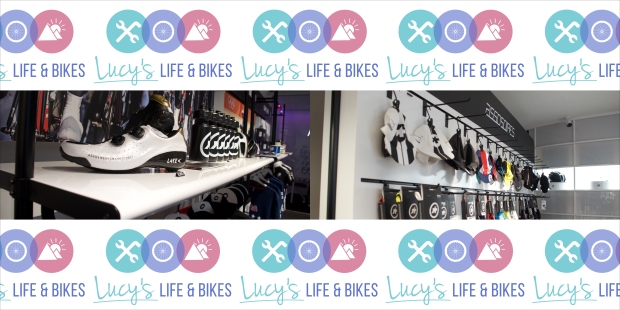 With the welcoming guys behind the counter, who are rather knowledgeable about the local cycling scene, ASSOS go above and beyond to find you the right kit. A static bike in the back, you can actually see what the kits you’re considering fits like in the riding position before you buy it. We all know comfort in paramount on those long rides…

Walking around a bike shop it is common to find a women’s specific section, but rather than splitting the sport into what is already segregated enough, ASSOS split their shop into collections. A pink cover on the coat hanger representing the women’s kit.

And before you think ‘well women’s kit shouldn’t be represented by the colour pink’, the padding on all of their kit is pink. I often found myself picking up men’s kit before noticing the pink sleeves on some of the coat hangers!

Pink is just ASSOS’s colour. And I’m a fan of it too.

Last on the list (well this list) is the more MTB focussed shop; Soho Bikes London. Being involved in mountain biking before trying road, Soho Bikes has been on my radar for a while. Popular shows on YouTube and also having a coffee shop like Rapha, walking around it shows Soho is more about the mountain biker or commuter. Filled with mountain bike memorabilia from the likes of Steve Peat,  Soho is not your ordinary bike shop. Walking in you’ll find their coffee shop, from which you’ll be led deeper into the shop past Soho merchandise and bikes from the likes of Santa Cruz, Trek and Orange.

Despite the differences in the objectives of each, it was clear the one common feature was coffee. Any cyclist, whether road or MTB, will always appreciate a good quality coffee.

3 thoughts on “What A Cyclist Does In London”