Ryan takes on the infamous cycling race, CiCLE Classic, around Rutland Water to honour 100 years of the Royal Air Force. 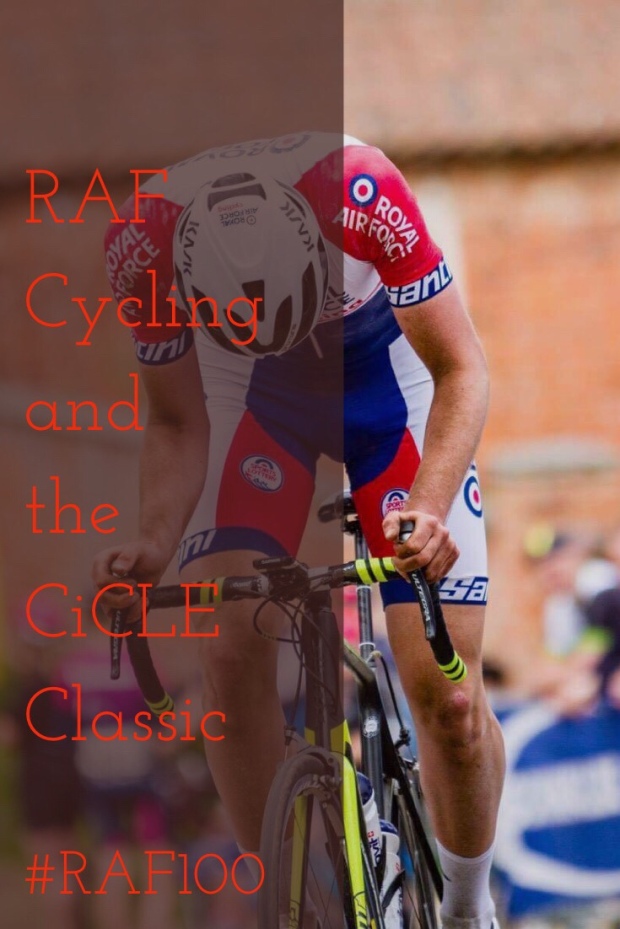 My adventure to the Cicle Classic started late last year when we decided that as 2018 was the 100th anniversary of the formation on the Royal Air Force, it would be pretty cool to get the RAF cycling team into one of the big races in the UK.

We asked the organisers of many of the UK’s premier races, but reduced field sizes and the large number of UK pro teams was making it difficult to fit us in. But then the amazing Colin Clews said he had space for a team of four riders.

Things had escalated; now we weren’t just racing a UK professional race, this race was part of the UCI European tour.

So what makes the Rutlan-Melton International CiCLE so special?

Now in its 14th year, it is widely regarded as the longest, hardest one day race in the UK, the CiCLE classic is contested by 36 teams over 117 miles. What makes this race unique in the UK is the 11 special sectors taking the race “off road” down farm tracks and dirt tracks. This makes punctures and mechanical issues very common, so spare wheels and support crew can make all the difference.

We were the lowest ranked team in the race, and I was rider number 192 (the last man in the race). Turning up to the team area we realised just how deep we were. Team buses, following cars, mechanics, gazebos, turbo trainers for warm ups. All the riders had to do was turn up and get on their bikes. We on the other hand turned up in our own cars and set about sorting our bikes and kit out by ourselves.

We did have matching kit though…

We met our 2 dedicated helpers and passed them the array of random drinks bottles and spare wheels we had. As they made their way to points on the course, we donned our helmets and headed off to the start area to sign on.

The start area was buzzing with spectators. It was pretty cool to walk up on stage to sign on as we were introduced to the amassing crowd. Funny moment of the day, the commentator introduced us as the team of RAF Pro Cycling, ha, he must have been used to saying “pro cycling” at the end of every team. There is nothing “pro” about our team, we all have day jobs.

Lining up on the start line was a surreal experience; I was stood next to guys I have watched on TV! There were Olympians, former world and national champions and a handful of riders who had just returned from the Commonwealth Games. And there I was about to ride the same race as them!

So at 11.00 on the dot, the race started. The first mile was neutralised behind the lead car, which was scary as everyone was jockeying for position. The flag dropped and I found myself sprinting as hard as I could as everyone accelerated. I looked down at my computer and we were doing 45mph!!! It was at that point I knew we were in for a long hard day in the saddle. 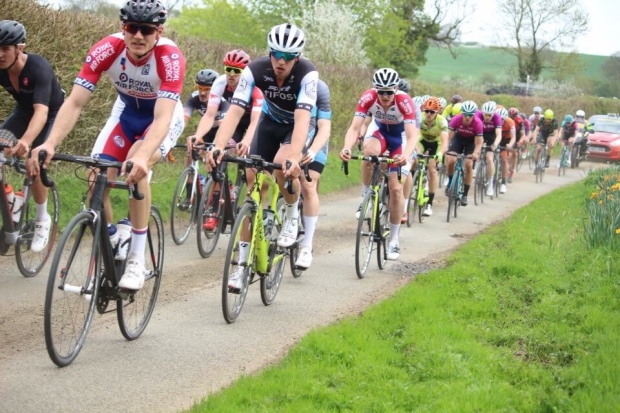 The first 30 miles were on the wide roads around Rutland Water, and with the roads totally closed to traffic we had both sides of the road to ride on. I’ve never ridden in a group of 192 people, and I’m not going to lie it is rather scary, everyone was nervous and trying to move up towards the front. I was just trying to stay upright and not get dropped.

Going into the first special sector at 30 miles there was a huge acceleration, nearly 200 guys were going to do a 90 degree left turn from a 2 lane main road onto a single lane farm track. It was hairy to say the least.

I found myself about 2 thirds of the way down the bunch. Just as I thought “this isn’t too bad” 2 riders from the same team collided in front of me and went down forcing me onto the grass to get round. Thankfully it was dry and not muddy. So from then on the field would only thin out further.

Ian, one of the other RAF riders, was not so lucky. He punctured mid sector and then had to wait for the neutral service car to get a spare wheel.

Leaving the sector I was just relaxing and commending myself on surviving when the bunch accelerated and I was forced to sprint to keep up. I saw the gap get bigger in front of me and thought it could be all over. Thankfully the small group of riders around me wanted to work hard to try and get back on. We eventually made it back to the main group, which was now noticeably smaller than it was a few miles earlier. I saw my two remaining RAF teammates who were equally as shocked as I was. 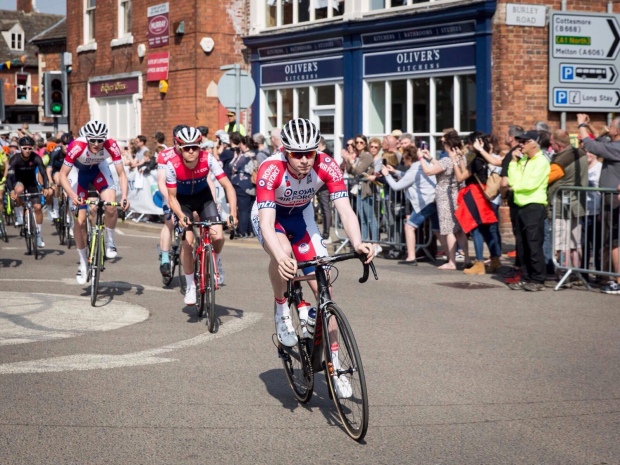 The next 20 miles consisted of me hanging onto the rear part of the group as we went over hills and down narrow lanes. Every couple of miles I would see someone crash or puncture. Including one rider from a European team go careering off the road into an electric fence with barbed wire on the top. That looked very nasty.

In the early part of the sector at 53 miles the worst happened, I punctured. My heart sank, this was not good. The only thing to do was keep pedalling. I rode the rest of the sector on a flat, my rear wheel sliding all over the place as riders shot passed me. 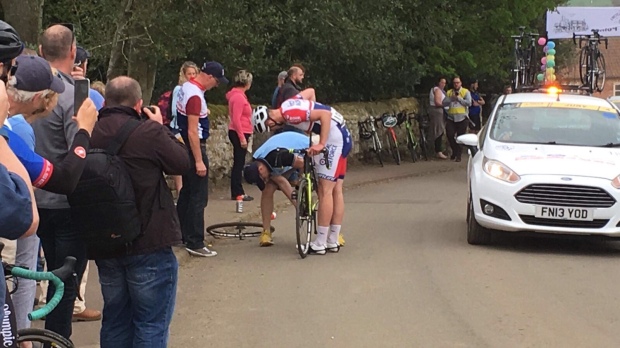 Now puncturing is bad luck, but this was the luckiest puncture I could have had. As I excited the sector I saw an RAF jersey at the side of the road. Of all the places for Silky, one of our two helpers to stand it was here. After a slightly fumbled wheel change I was back on my bike and beginning the chase back on. Soon enough I was back in to convoy of cars following the race and working my way up. The convoy is a scary place, the vehicles can be unpredictable, especially on narrow roads. Team cars suddenly stopping to help their riders, riders being dropped and going backwards, and all in a cloud of dust kicked up by the 40+ vehicles.

After 10 miles of chasing I finally got back to the back of the bunch. As I made it back on who should I see sitting pretty at the back, Dan, one of my teammates. We had a quick chat and swapped drinks bottles (I had one of his flavoured powders and he had one with just plain water).

Back in the bunch I was sitting fairly happy and then just before the 80 mile point I cramped bad on one of the steep climbs losing contact with the back of the bunch. Bizarrely, Dan suffered the same fate at the same time. After giving each other a quick pep talk, we decided to not give up and press on as a pair and try and get back.

We spent 10 miles weaving through the convoy trying as hard as we could; we got within 25m of the bunch as it hit a sector. The acceleration was too much for us to live with and the bunch disappeared into the distance.

We kept working, knowing that if we could get to the finishing circuit after the 100 mile point we could finish the race. The only thing stopping us was the broom wagon, the last car in the race convoy. Once this car catches you, you are eliminated from the race.

As we pushed on Dan cramped again and dropped back. Now on my own I had the painful experience of carrying on as best I could, all the time passing riders that had been dropped and given up. 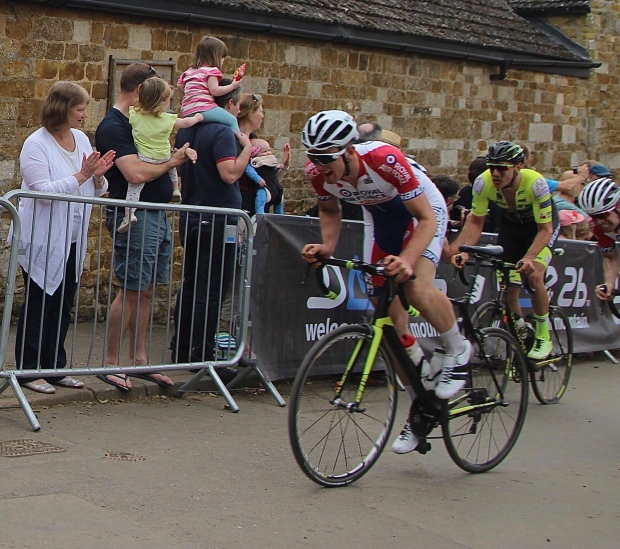 Then the inevitable happened, I was caught by the broom waggon at 97 miles. So close to the finishing circuit, but part of me was relieved that the suffering was over.

I took the straight line to the finish to watch the last part of the race. And eventually meeting up with Dan and Ian. Both of us stood there, covered in mud/dust and totally empty. We must have looked bad, the photographers all started taking photos of us and the state we were in.

Incredibly, Antony, the remaining RAF rider, was still in the race. He’d hung in there as the race exploded and was in one of the chasing groups. We all stood there to cheer him on, it didn’t matter that we were tired, cold, hungry and no longer in the race.

We started as a team and we would finish as a team.

Antony came down the finish straight leading his group, about 8 minutes down on the winner. But just surviving and finishing this race is a major achievement. That day, over 100 riders didn’t finish, many of them full time professionals.

In summary, that was the hardest 4.5 hours of my cycling career, and I’ve never been so proud of a DNF. This race is something special, totally unique and incredibly hard. I may never get another chance to ride it or even compete at this level, but I’m proud to have been part of it.

The CiCLE classic takes place at the end of April each year, and if you find yourself in the Rutland area I’d thoroughly recommend going to spectate. The crowds were amazing, and with the race making several passes of the same area, you can watch the race several times from one location.

Since racing the CiCLE Classic Ryan has been diagnosed with a heart condition after a screening by Cardiac Risk in the Young. Now he shares his expertise that got him to 26th in the country in Time-Trial via coaching on Ryan Morley Coaching.

9 thoughts on “RAF Cycling and the CiCLE Classic”