I followed Ryan to the Isle of Man for the British National TT Championships, where he was competing.

Sometimes the shorter the trip is, the more you remember. You still try to squeeze as much in, but you’re still determined to go back.

No sooner was I being thrown back into my seat at the start of the runway at Liverpool Airport, I was landing in the Isle of Man. That little island in the middle of the Irish Sea. The sea water as blue as anything, and country lanes winding through the rolling fields. It takes us 20 minutes to get from one side of the island to the other. Specifically to … where the British National TT Championships were being held. Ryan was racing and I was just there to wander around with my camera. 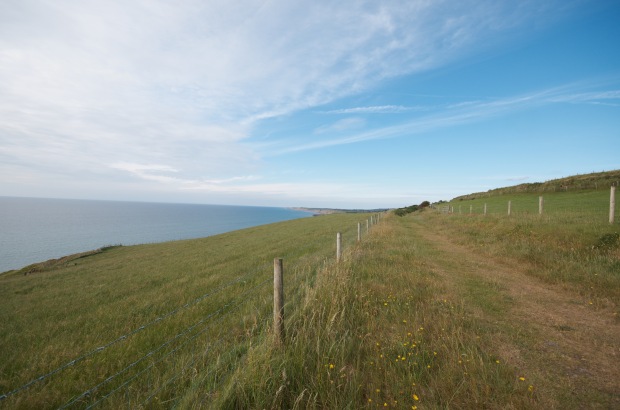 Waiting for his race slot was tense. He was helping the now National TT Champion, Claire Rose, by going in her team car at midday. But he still had the rest of the day to try and occupy himself because it wasn’t like he could even go and ride his bike.

I was stupidly in the Isle of Man without my bike, which is the worst mistake anyone could make by the way! The U23 girls were set up on Turbo-Trainers to warm-up. The women were sorting their race kit. It took me back to when I raced downhill. It made me miss racing…a lot. Maybe I’ll find some Time-Trials that aren’t on Dual Carriageways to try…

The day passed with the results racking up:

There was only the men’s race left now.

With part of the course going along the coast, that’s where I decided to head. I couldn’t really do much at race HQ so I thought I may as well go and take some photos when Ryan is racing. There was the small task of the 4 mile walk there though. I suppose I could have ran it but without running trainers and a camera in my bag…that wouldn’t have been the best idea!

I’d walked quite away when I asked one of the marshals which was the quickest way to the coast road. They pointed me in the right direction, but then offered to drive me there. Lifesavers! So at the coast much quicker than anticipated, I just needed to find a decent spot to photograph the riders. A tip to myself for next time I’m doing this? Wear more appropriate shoes/clothes. Shorts weren’t the best idea for walking through long grass…

I may also end up on TV in my bright yellow Timberland jacket…o dear!

I managed to find a good spot on a bend called ‘Devil’s Elbow’ and was waiting for Ryan to come past. For some random reason I’d got it in my head his start time was 19.07. It was actually 18.54, so you can imagine me trying to rush to press the shutter when he came past earlier than I’d expected! Thankfully I still managed to get some photos. 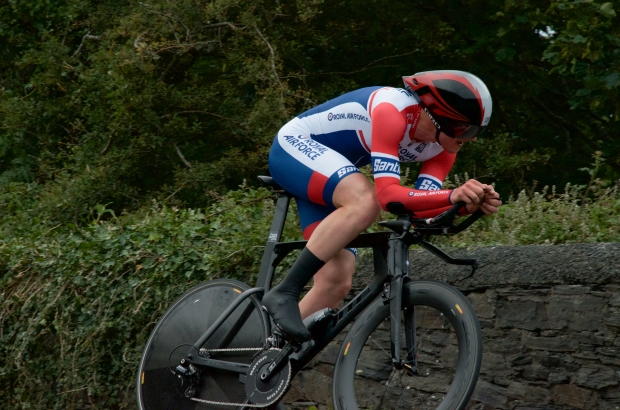 The hour he was racing was possibly the most tense I had been for a while. The two times he came past (they were doing two laps of the one lap course the women did) I couldn’t figure out whether he felt good on the bike or was struggling. 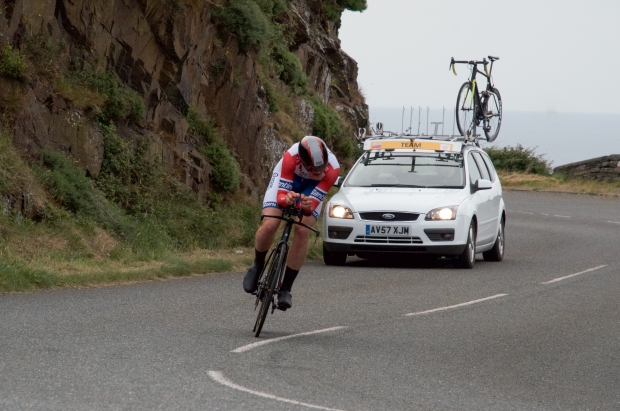 It was a good while before I knew how he’d got on as well with the signal being touch and go on the island. Once he’d come past the second time, I made my way back to the race HQ, which I had to walk this time. It was a pretty long walk with a camera in my bag, but surprisingly I didn’t get lost. My memory of certain roads must be getting better!

When I finally got back to the race HQ I found he’d finished the course in 1 hour 4 minutes, which was exactly the time he wanted to achieve. What a relief! Steve Cummings became the National Champion with a time of 57 minutes and 18 seconds.

We then had the task of finding food at 9 o’clock at night, which isn’t as easy as it sounds! Even the chip shops were shut, but thankfully a Chinese was still open. We clearly have strong athlete diets…ha!

Look out for my next blog post where we explored Peel before having to head back on the ferry (boo!).